Found this on LilyGoesFashion Blogpost and I just had to go to the Tannenbaum event and get one for myself. This is truly amazing, more than great value at $299L at the event! It includes props as well. Great ambiance!

And color me tickled, Lily used my Gwendolin outfit for her photo shoot! 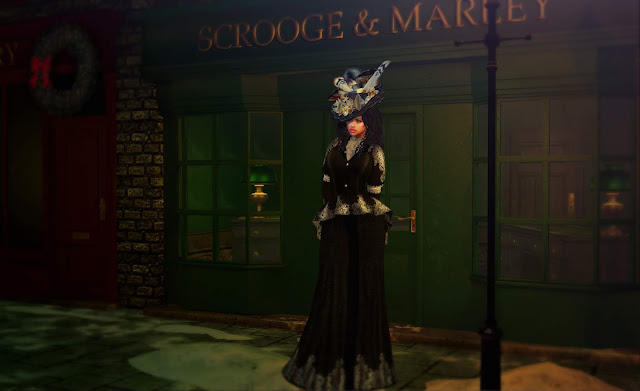 and here’s my version, with the Gray Blue version of Vanessa Ives outfit.

The title of this list/article really should be 15 Of The Most Beautiful Actresses Of 1900s Edwardian Era.  Sad, but there were so many lovely faces from that era I guess they had to narrow the field. Ethel Clayton was an American actress of the silent film era. Her screen debut came in 1909, in a short called Justified. She jockeyed her early film appearances with a burgeoning stage career. Her pretty brunette looks were reminiscent of the famous Gibson Girl drawings by Charles Dana Gibson. On the stage, she appeared mainly in musicals or musical reviews such as The Ziegfeld Follies of 1911.

Source: MORE from 15 Of The Most Beautiful Women Of 1900s Edwardian Era | Bored Panda

Now this is serious dedication to the creative urge.

Marvelous Milliners has blogged my hats!  This just tickles me, because most of my hats are parts of various outfits, and I’ve offered them for sale as separate pieces for those who want just the hat.  So it’s uber kewl to get some recognition for my little headwear. :))

Definitely check out the tutorials here:

Tutorials & PSAs | Its Only Fashion.

Bookmarked for future and leisurely perusal!

And down by the shore an orchestra’s playing | Its Only Fashion.

I love this!  The way she’s lit these pics, the opal gown looks all different colors.

Kitty’s Meanderings blogged several events, and Genre was among them and and and … my opal Satin Doll gown is featured!  I guess the opal is the one folx love best, which surprises me, but it goes to prove, ya just never know.

Kitty’s Meanderings: More Events, I am going to loose my mind! Gatcha til the BittR.end, Genre, and The Comic Fashion Fair.

I got blogged!  I’m so tickled.  My Dark Hearts corset is featured, and in some wonderful pics!  I really envy ppl who can take such great pics in SL, it’s not an easy thing to do.  Check out the post here:

An illustrated page from The cutters’ practical guide to the cutting of Ladies’ Garments.

I love that these old books and documents are available to us!  This one is 142 pages of instruction with illustrations in the center.  Check this page, where you can find a class in proper tailoring offered to women.  Snicker… guess there was stitching and sewing, and then there was tailoring.